Spamming Various forms of Internet scams Some real time examples of identity theft
Tax fraud identity scam Tips to avoid and beware of internet scam Social security number identity theft scheme
Any types of scams mentioned in previous page could find you through the internet, and all the same warnings equally apply. The most common internet scams reported involve phoney investments in work from home schemes and pyramid selling schemes. The internet makes it even easier for high tech touts to hide, shut down, or move on. Clever websites may look legitimate and be more convincing than newspaper advertisements.

Internet is a fast growing technology where there is a lot of room for advancement and development. Internet is a network of networks, where connection is established at one single click. But there are individuals who take advantage of this technology in order to cheat the innocent and unaware users in the name of internet scam. Internet scam dates back to olden days when online users were cheated in the name of connectivity.

Scams may find you via your email address. Treat unsolicited emails with the same caution you would junk mail. Junk mail sent electronically is called "spamming".

Internet Scam is the term used for any online fraud done through the use of computer or the internet. This may involve using of sophisticatedly designed technological tools that are designed to access a secure connection. The ultimate aim of the scammer in this type of scam is to obtain the victim's private information such as passwords, credit card details, user details etc in order to conduct identity theft. There are different forms of scam that the scammers do to forge the identity of a user. Phishing attacks, credit card stealing etc are some of the common types of identity scams. Scammers use internet as a medium in order to cheat the users. Hence the name internet scams.

Scammers are getting highly professional in writing web based malicious code that attacks the victims computer or browser's cookies to obtain user's personal information. Internet scam is basically associated with the term "identity theft" where the scammer hacks a particular user's confidential information. Internet scam has taken different forms and some of them are as follows.

We have compiled a list of websites that are fighting against internet scam which will help online users to report scams or find a solution if being scammed.

Identity Theft:
Identity fraud or identity theft is the most common form of internet fraud done by scammers. In this form of internet scam, the scammers hijack the email account of one particular victim in order to have access to all the contact lists from the email account. The scammer then sends mail from some of the email ids that are present in the hacked email account asking to wire money. The victim, who receives the mail, believes that the email is legitimately sent from the friend's email id. It is always advisable for all online users to be careful with such mails received from their friends. It is always a good practice to double check before wiring any amount to the mentioned bank account in the mail. There are many other ways in which scammers conduct identity theft. Filing tax returns is another popular area where scammers file fake returns in the name of deceased users.

Below screenshot is an example of a female scammer named Cheryl Wright who was sentenced to 72 months in prison along with a payable fine of $690,767 dollars. She was found guilty for filing fake tax returns for dead users. She used personal identifying information and social security numbers of deceased individuals.

Tax fraud identity scam:
Here is another example identity theft where a female scammer who was involved in stealing personal identity information from the Central Mississippi Correctional facility located in Rankin country. She along with her co conspirator was involved in filing fake tax returns, 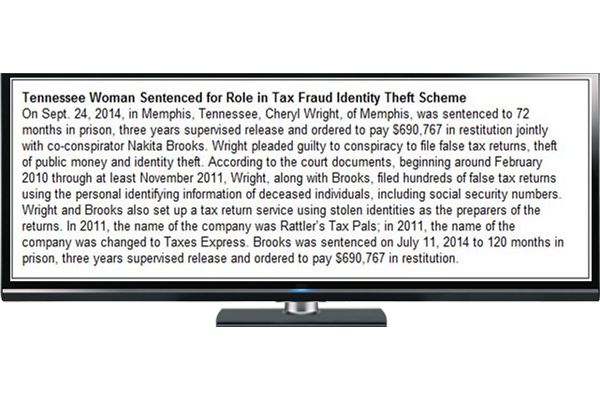 Identity theft scam scheme:
Kevin Cimeus, a scammer from Florida was sentenced to 156 months of imprisonment on September 17 2014. He was involved in identity theft and tax fraud which included 2400 identification information and social security numbers of users which he used, to fraudulently obtain tax amounts. 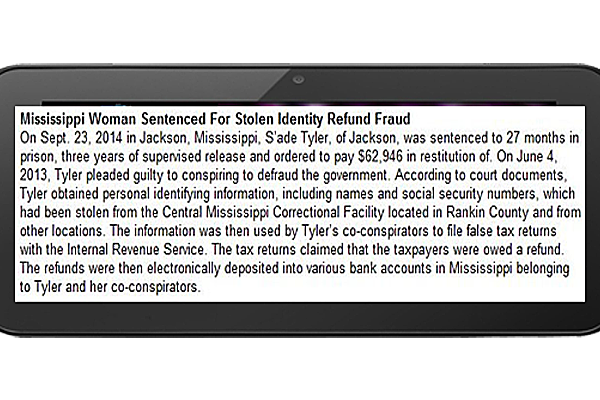 Social security number identity theft scheme:
Identity theft is the most popular and common type of internet fraud done by scammers in order to swindle money from innocent users. Online users who are not aware of such schemes used by scammers should be very careful with their identity information. Scammers use email as a medium to send out links appearing to be from legitimate organizations such as banks and ecommerce websites, asking for user's personal information. These mails are framed in a legitimate way that often many users fall prey to such scam emails. 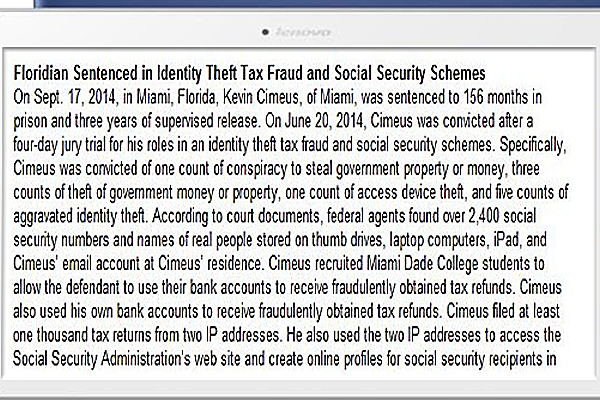 Second in the list of internet fraud is computer crimes. This type of scam includes all the categories that target your computer, network or personal information stored in your browsers cookies. Many types of attacks like phishing, identity theft are made successful by attacking the victim's computer alone. The scammer writes a malicious code that gets downloaded as an executable file and resides on the user's computer. When the user accesses any confidential data or page from the same computer, the scammer is able to access the personal information too (with the help of the code present in the victim's computer). Information like user id's and passwords, credit card details is all hacked by the scammers. Having the file sharing option on the victims computer opens more opportunities for the scammer to attack.
It is always a good practice to protect your computer and network with firewalls, anti malware, anti spyware and antivirus software that limits the probability of such attacks. 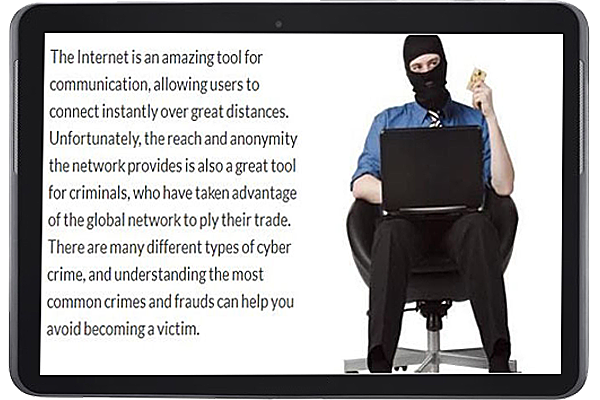 How does the scam work?

Most of the times, scammers appear to be legitimate buyers and often pay an extra amount which is called "overpayment". The scammer smarty does this overpayment and asks the seller to wire back the additional amount paid.
Below is an example of a victim, explaining his experience in internet overpayment scam: Has someone purchased something from you online, then tried to overpay, suggesting you simply refund them the difference?

In my case, I sold a computer on eBay. The buyer wanted me to ship it out of the country and sent me a generous payment via PayPal, asking me to simply refund the difference after I knew the actual shipping cost. The only hitch: The PayPal payment notification was a fake and the eBay account was hijacked. If I'd fallen for the scam, I would have lost my computer and handed cash to the criminal in the process. Alarm bells should immediately go off any time someone overpays you and don't assume you're in the clear just because your bank cashed the check. They can still come after you to recoup the money once they discover it's a bogus check.

Auction scam is another form of internet fraud where scammers appear to be legitimate buyers in online auction sites. There are many crimes be committed by fraudsters in almost all the auction sites. The scammer uses the overpayment scheme in auction scam in order to make the user wire the extra money back to the scammer. Such scams operate from Ghana. The scammer uses a fake IP address that appears to be from the United States. After making an overpayment, the scammer insists to wire the money back to Africa. Scammers usually hijack the PayPal account or the account from which you operate in the auction website. The scammers use same tactics in different forms and media thus creating a name of scam in every industry related to the internet. 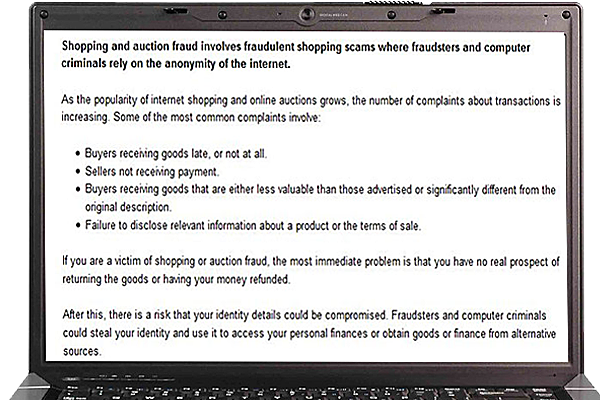 Some of the problems in auction fraud are:

After this the identity information that the users have entered is at risk. Users should be really careful when entering their information online.

The most popular and common type of internet fraud is phishing scam. Phishing is a technique where the scammer manages to masquerade a page on the web when the user is just about to enter the personal information. Say for example, a user uses internet banking facility. When the user sets up the credit card information or password data, the scammer manages to phish a page as same as the banking page. Without the knowledge of this happening the users tend to enter all the details which are stolen by the scammer at the other end. Most common ways in which a scammer becomes successful in phishing attack is by sending emails. The scammer sends emails which appear to have come from the victim's bank, asking them to clarify their personal information. Phishing scam is where the scammers originate identity theft, user information fraud, credit card scam and so on.

Tips to avoid and beware of internet scam: