What is pyramid scheme?

An overview of pyramid scheme scam

Whom do scammer target to enter pyramid scam

The main characteristic of a pyramid selling scheme is that earning money and gaining promotion within the scheme depends primarily on recruiting new people to the scheme, and those new people recruiting more people into the scheme, and these new people recruiting more people, and so on. Pyramid schemes are unfair trade practices because they are likely to be unfair to most participants in the scheme, the rewards for those at the top come from those below, and because eventually it will become impossible to recruit the number of people needed to produce reasonable financial rewards to participants.

We have compiled a list of several reliable online scam fighting agencies to help you keep up to date on current and past pyramid scheme alert scams and its types.

In this example the scheme depends on each participant recruiting 6 new members into the scheme. The figure below shows how many people will need to have joined the scheme at each level, in order for those above to be paid.

The total population of the world is approximately 7 billion so after 13 levels there's not enough people on the planet to keep the scheme going. Schemes also include those that involve participants using an agent, provided by the scheme operators, to recruit others on their behalf, instead of having to recruit new participants themselves.

What is pyramid scheme?

Pyramid scheme is a strategy adopted by marketers in order to promote a particular brand, product or service. In this scheme the consumers or investors are promised huge profits, based on the number of users they recruit to promote the brand. Most of the pyramid scheme owners recruit their first batch at seminars, personal phone calls or through mails. The promotion strategy is made very attractive in order to attract the maximum number of users. The recruiter is asked in turn bring in investors or other recruiters which will promote the product. Based on the number of new people joining the pyramid scheme, the initial investor receives commission.

An overview of pyramid scheme scam:

Most of the companies, whose products are not best selling, enter into pyramid scheme. The reality is that, in most of the pyramid scheme companies the products are only used by the recruits in the scheme and not the general public. When the recruiter sells or promotes the product, they often show that there are a huge number of buyers for their products. Most of the scam companies enter into this type of scheme in order to obtain investments from the users. The advertising for the products are done in very attractive ways and the commission rates are also very high at the time of the promotion. Most of the schemes are dissolved with many investors in the scheme without having received their commission rates.

Below screenshot is an example of how a pyramid scheme works. 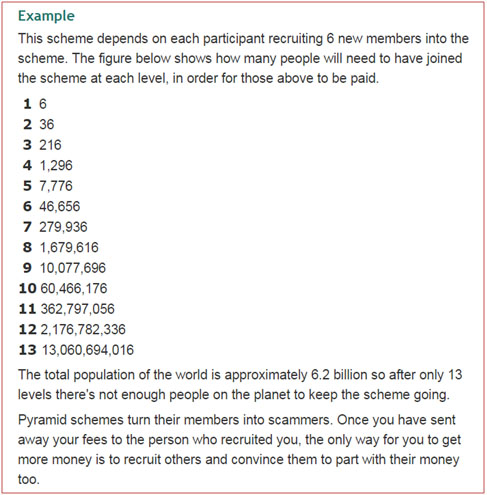 Whom do scammers target to enter the pyramid scam scheme?

In 2007, a company named Wealth pools was caught in having scammed a number of people in the name of pyramid scheme. SEC froze the assets of this company. This company was involved in selling English and Spanish DVD's through a global network. Users were asked to buy DVD's and resell them keeping a profit margin. It was observed that there were no profits involved in reselling the DVDs, instead the company made profits only when new recruits were added to the pyramid scheme. Ultimately, the company used the users money as profit. This scheme impacted around 70k people from 64 different countries costing the consumers a loss of $132 million dollars.

Big co-op Inc, an internet shopping website was involved in operating a pyramid scam scheme from California. People joining the pyramid scam scheme in this company were asked to purchase a license that would reap them commissions when the sold the company products to outsiders. The people working for this company were even asked to sell licenses to other people in order to join the company. It was also recorded that no profits were made out of the products sold from the company; instead the profits were raised out of the licenses purchased by new users. This scheme cost about 8.2 million dollars to about 1000 residents from California. The owners of big co-op Inc were sentenced to 20 years of imprisonment.

Harvey Joseph Dockstader Jr. Dockstader from Texas operated a pyramid scheme called Elite Activity which recruited participants to take part in a "cycle of abundance." In this scheme, the participants were asked to contribute a "gift", necessarily a monetary gift as an initial recruitment fee and were promised substantial profits as and when they recruited new participants. This scheme can also be considered under the category of religious scam, as the owner of this pyramid scheme convinced many participants to join by claiming that his program was a work of god and inspired by god. He often used the name of god assuring that users would reap huge profits as a blessing from god.

The hard truth of pyramid schemes in various countries:

Details of top companies being accused of pyramid schemes:

This company was founded in early 90s, dealing in nutritional supplements. The company is a public company with net revenue of $790 million, which was accused of running pyramid scheme.

Another public company accused of having adopted pyramid scheme is Nu skin enterprises. The company started its operation in the year 1984, selling supplements for skin care. The net revenue of this company was close to 2.57 billion dollars.

Mary Kay, a private company incorporated in 1963 dealing in cosmetics is another company that was involved in pyramid scheme. The net revenue was observed to be 4 billion dollars.