An overview of love scams:

Love scammers pretend to be looking for love, engage the affection of their possible victims by using photos from the internet to present a gorgeous view of themselves. They often target people on dating sites or in chat rooms and will repeatedly say that they are in love promptly in an effort to make the victim fall for them. To fight back against love scams, there are websites who are going beyond the mainstream approach to report and take actions against love scammers. They share their experiences and information in the form of portable documents.

How love scammers get you trapped:

The scam is not a one man affair; love scammers have a hierarchy and organizational structure that include the head, the manager and the workers. The internet is their prime source to get you trapped. They contact you through online by someone who appears interested in you. Often, scammers set up fake profiles and claim to be living overseas. They introduce themselves as a business man or women, who is seeking prospective soul mates. The scammers tell their own cooked up stories and pretend to be loving and caring. Through back and forth chatting, they try to gain your trust and scrutinize your personal information. After getting good rapport with you, he or she will ask you to pay their hospital bills, visa fees and other legal expenses. In an extreme case, you may be contacted by a fake doctor and requested to send huge sum of money for the hospital expense saying that your loved one is in need of surgery or medical assistance. The FBI report says that U.S citizens are losing an average of more than $400,000 dollars in these types of scams.

The cruel scammers target the helpless persons such as divorcees, widows, widowers and differently able persons, who have their residence in America. The cheaters clearly know that these persons are emotionally instable and want someone's console. So, they claim themselves as widows or widowers or divorcees, in order to gain your sympathy and trust. With the advantage of internet, these scammers cheat persons of even same gender.

Protect yourself from love scammers:

There are many fake investigators, who promise the customers to track their love scammer and bring them to justice. They offer their service for huge sum of money, but reality is that it is the extension of love scam. After cheating the innocents, they have their contact list and personal details and again cheat them in the name of investigation. So, it is much recommended to seek help only from FBI. In case, if you're opting private detective agencies double check their credentials.

Common Narratives used by scammers in order to extract money from their victims:

Some statistical data from the internet pertaining to Love Scams

1)   The below statistics show the number of love scam cases reported in the year 2012. It is inferred that women are more likely to fall prey to love scam when compared to men. The chart also reveals the age group of men and women that have been victims of love scam. 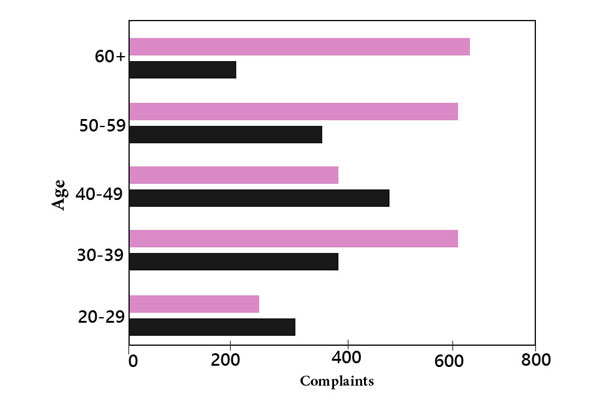 2)   The below chart specifies increase in the number of users of online dating websites from the year 2008 to 2009. Scammers take advantage of these increasing numbers of users in online dating sites and tend to create fake profiles and cheat in the name of love. 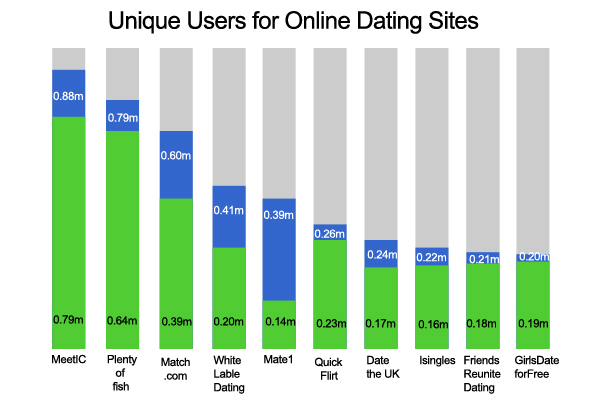 3)   The below statistics from FBI Internet Crime Complaint Center reveals the data about the most popular scam in which Americans lose hundreds of millions in online scams. The top most source of online scam reported is the romance scam or the love scam where men and women lost maximum money. 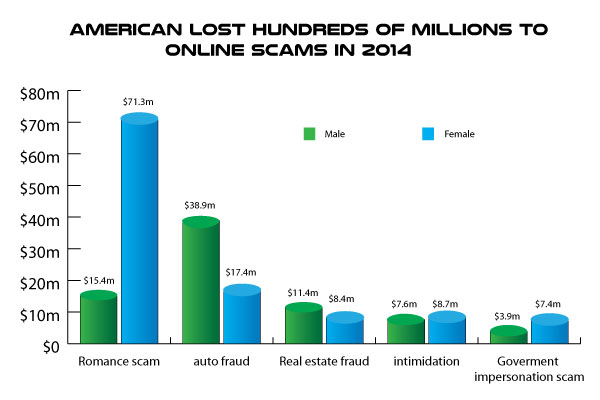 4)   The below chart depicts the percentage of American adults in each age group who have used online dating websites or apps. The highest number of users is reported in the age group 25 to 34 years followed by 35 to 44 years. It is also inferred that the maximum number of victims falling prey to love scam are from the age group 25 to 35 years. 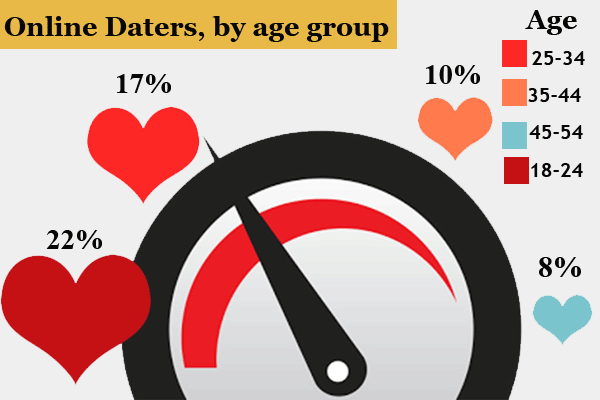 5)   Love Scam/ Romance Scam also popularly known as Confidence fraud is one of the most common ways adopted by scammers in order to swindle money from users. The below pie chart shows the total number of losses reported segregated by the age group of men and women. Women with age group 40 and above have reported the maximum number of losses in love scam. 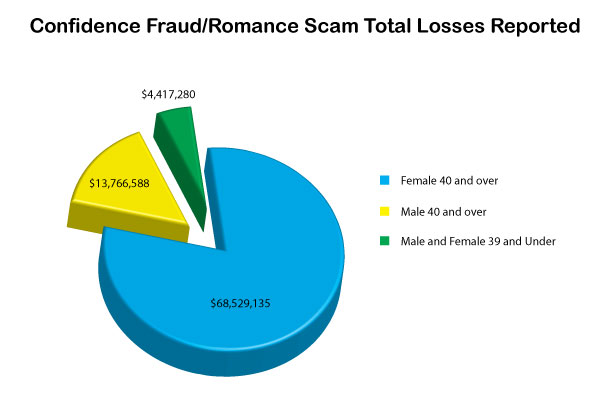 The graph shows statistics of online love/romance scam in September 2015. It reports the number of financial losses and the sources of love scam. 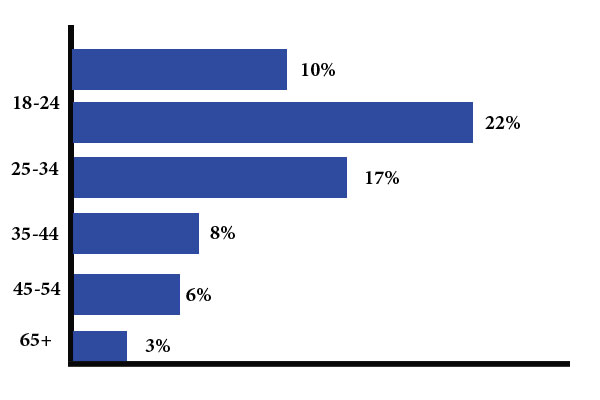 The latest news on Online dating website hacked – 90% of profiles discovered to be fake!

The below news talks about the online dating site that was recently hacked. AshleyMadison.com is now popularly known as online cheating site with thousands of fake female account profiles. The hackers revealed that there were no real women who created profiles in AshleyMadison.com. Men who were dating women online at AshelyMadison.com were indirectly victims of love scam. An in depth analysis on the site's user database revealed that there were about 31 million accounts belonging to men and about 5 million accounts belonging to women. 90% of these accounts created for women were created internally. 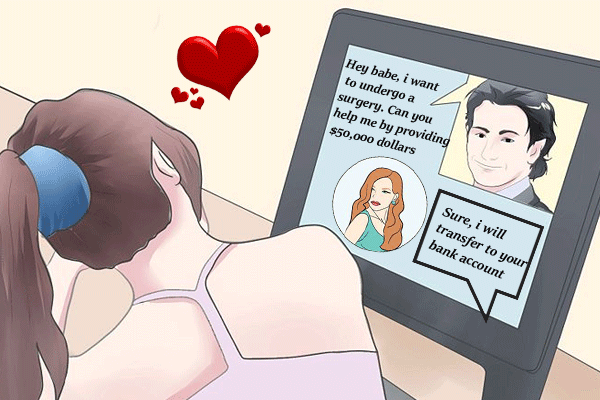 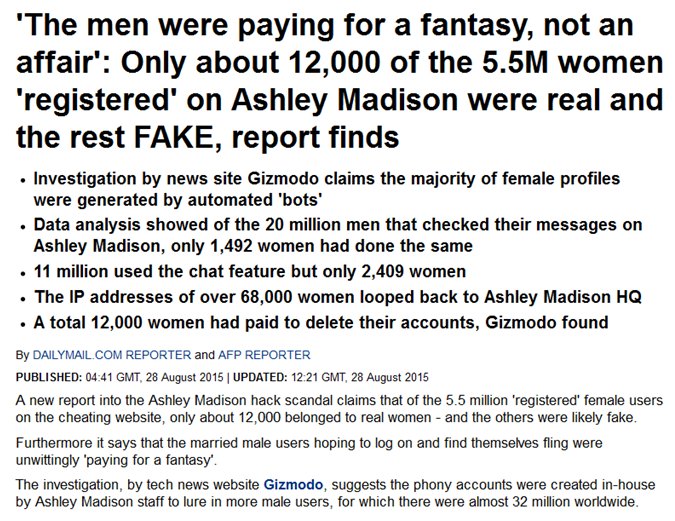 The below mentioned statistical data from AshleyMadison.com shows that there were only limited number of female profiles that were created internally by the workers of AshleyMadison.com. The data also reveals the usage of the website by the female profile which is considerably very less when compared to the male accounts. 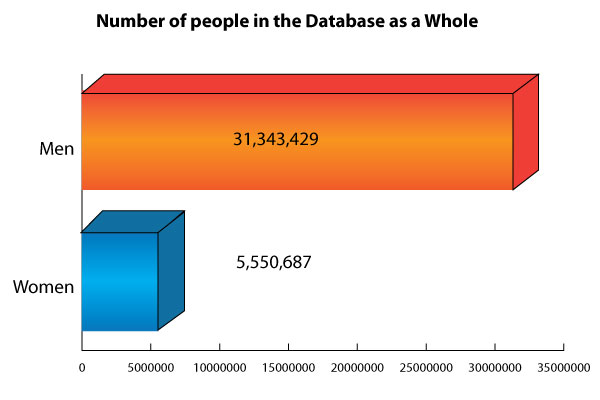 It was inferred that the IP addresses of over 68,000 registered female users looped back to Ashley Madison Headquarters. So what does all this prove? Ashley Madison's female profiles were all created with the intention of conducting scam. Online dating websites are never trust worthy. There can be a whole syndicate involved behind such dating sites that conduct scam in the name of love. 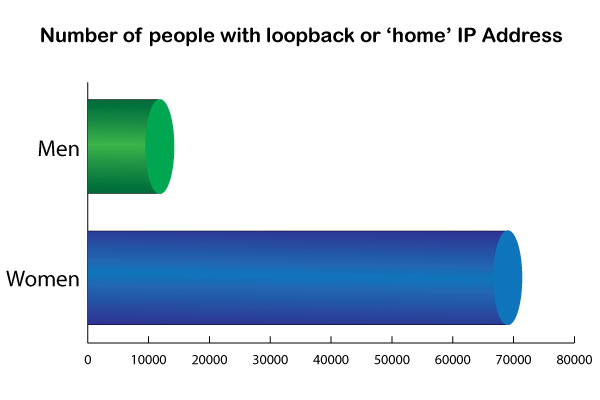 Feel Free to use our Spam Checker Tool

We are providing the Spam Checker Tool for your convenience. Here you can enter the email or the contact number that you suspect to be a scam. This tool checks it with our spam database list and ensure you regarding the email or the phone number is real one or the bogus.


Report scam to United States government-you could file a complaint about scam or other crime here.